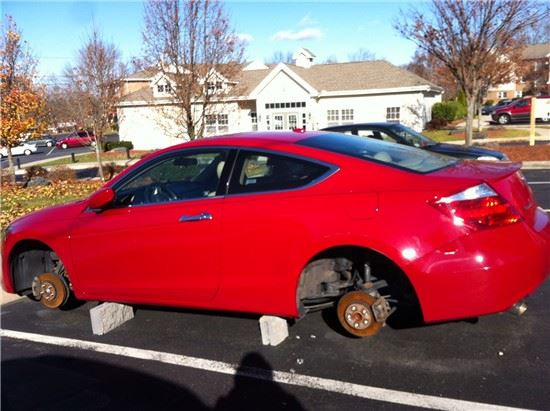 Theft of Wheels & Tires in Lawrence

Theft of wheels and tires is a problem in Lawrence, in numerous nearby cities and towns, and in many communities across the country. Seemingly, rims and tires are getting targeted because they are easy to steal, easy to sell, can't be easily identified, and are an alternative to stealing an entire motor vehicle (which is becoming more difficult to steal and easier to track.)

Despite the attractiveness of motor vehicle wheels and tires for thieves, there are steps that vehicle owners can take to reduce their risk of being victimized.

In 2013, thefts of wheels and tires occurred throughout the city in a fairly dispersed pattern. Motor vehicles parked on the street, in residential parking lots, and in driveways have all been targeted. Car dealerships and repair shops have also been targeted.

Theft of wheels and tires is a crime that primarily occurs in the overnight hours between 1 a.m. and 4 a.m. This year, thefts have occurred more frequently on weekday days (Monday through Friday) than on weekend days (Saturday and Sunday).